All living organisms have a genome; this is named as DNA. Each genome contains the comprehensive information on how that particular organism develops, grows and lives until its end whether it is cat, a fish, a fruit or a human being.
Your genome is the operating manual containing all the instructions that helped you develop from a single cell into the person you are today. It guides your growth, helps your organs to do their jobs, and repairs itself when it becomes damaged. And it’s unique to you. The more you know about your genome and how it works, the more you'll understand your own health and make informed health decisions.

If all the DNA from a single human cell was stretched out end-to-end, it would make a six-foot-long strand comprised of a six billion letter code. It’s hard to imagine how that much DNA can be packed into a cell’s nucleus, which is so small it can only be seen with a specialized microscope. The secret lies in the highly structured and tightly packed nature of the genome.

Chromosomes are long strings of DNA that are interconnected containing hundreds of genes. Chromosomes can be found in the nucleus of the cell. Every living creature has different pair of chromosomes. They are considered to be the building block of the human body as they contain proteins that help in the strengthening of DNA. These proteins are called histones. 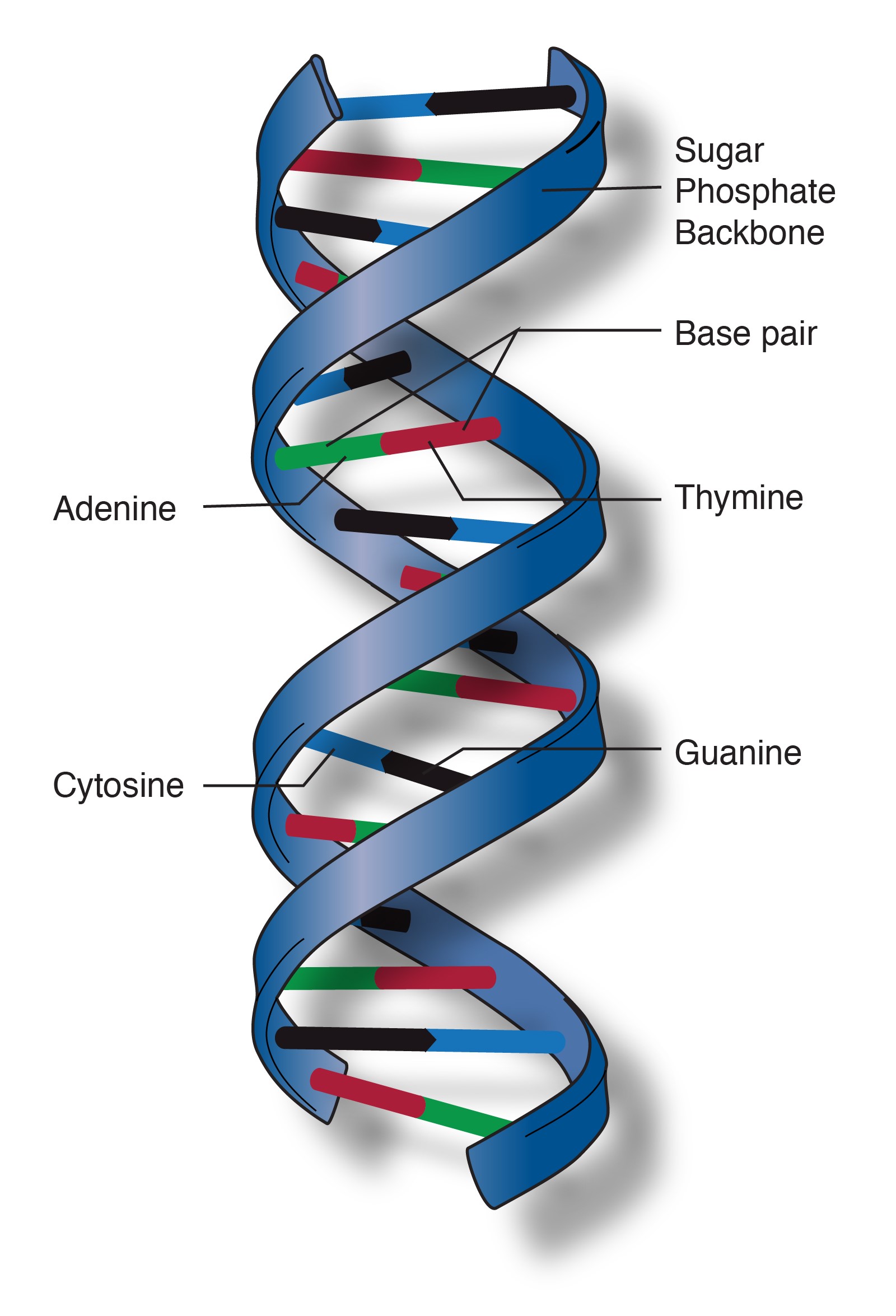 DNA, or deoxyribonucleic acid, is the hereditary material in humans and almost all other organisms. Nearly every cell in a person’s body has the same DNA. Most DNA is located in the cell nucleus (where it is called nuclear DNA), but a small amount of DNA can also be found in the mitochondria (where it is called mitochondrial DNA or mtDNA). Mitochondria are structures within cells that convert the energy from food into a form that cells can use.

The information in DNA is stored as a code made up of four chemical bases: adenine (A), guanine (G), cytosine (C), and thymine (T). Human DNA consists of about 3 billion bases, and more than 99 percent of those bases are the same in all people. The order, or sequence, of these bases determines the information available for building and maintaining an organism, similar to the way in which letters of the alphabet appear in a certain order to form words and sentences.

DNA bases pair up with each other, A with T and C with G, to form units called base pairs. Each base is also attached to a sugar molecule and a phosphate molecule. Together, a base, sugar, and phosphate are called a nucleotide. Nucleotides are arranged in two long strands that form a spiral called a double helix. The structure of the double helix is somewhat like a ladder, with the base pairs forming the ladder’s rungs and the sugar and phosphate molecules forming the vertical sidepieces of the ladder.

An important property of DNA is that it can replicate, or make copies of itself. Each strand of DNA in the double helix can serve as a pattern for duplicating the sequence of bases. This is critical when cells divide because each new cell needs to have an exact copy of the DNA present in the old cell.

Genomes are made of DNA, an extremely large molecule that looks like a long, twisted ladder.
DNA is read like a code. This code is made up of four types of chemical building blocks, adenine, thymine, cytosine, and guanine, abbreviated with the letters A, T, C, and G. The order of the letters in this code allows DNA to function in different ways. The code changes slightly from person to person to help make you who you are.

Double helix is the description of the structure of a DNA molecule. A DNA molecule consists of two strands that wind around each other like a twisted ladder. Each strand has a backbone made of alternating groups of sugar (deoxyribose) and phosphate groups. Attached to each sugar is one of four bases: adenine (A), cytosine (C), guanine (G), or thymine (T). The two strands are held together by bonds between the bases, adenine forming a base pair with thymine, and cytosine forming a base pair with guanine.

A double helix has become the icon for many, many kinds of discussions about where science has been and where it's going. This really is an amazing structure. You can't stare at the double helix for very long without having a sense of awe about the elegance of this information molecule DNA, with its double helical form basically being the way in which all living forms are connected to each other, because they all use this same structure for conveying that information. Of course, this is Watson and Crick's incredible realization back in 1953, but it will stand in history as probably one of the most significant scientific moments of all time.